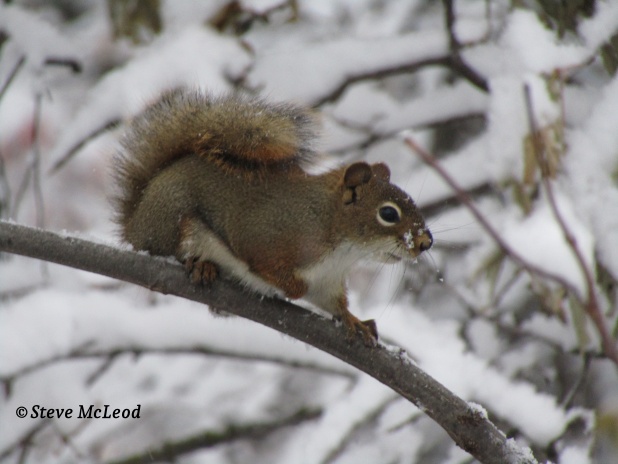 Hello everyone and Merry Christmas to all of you! Steve here from Steve’s Country with another story of my dad and I out looking for the perfect Christmas tree! This is something we did every year, so it was kind of a family tradition, though it was just dad and I, so get yourself a coffee, sit back and relax for a few minutes with us.

Dad suggested one day that we should go look for our Christmas tree. “Okay,” I said, “but the snow is deep again so we better take snowshoes with us.” “No snowshoes,” he said, ” I remember what happened last year.” However, mom talked him into it and off we went on our adventure! “This looks like a good spot,” said dad. We put on our snowshoes and went across the ditch with no problems, dad was actually walking very well compared to last year. Until we got in the trees, then things changed. I had to move this one low hanging branch on a spruce tree, so I called out to dad to be careful. Back went the branch and I heard dad yell. I turned around and there was dad lying on his back in the snow. “Are you tired already?”, I asked him, then started to laugh. “Stop laughing and help me get up,” he said. I went closer to grab his arm and dad yelled, waving his arms.

“I said help me, not bury me in the snow,” he said brushing away some snow from his face. “It’s just a little snow,” I said. “Move over a bit,” he suggested. So I naturally had to move my feet again and…dad yelled again. Okay, this time I kicked quite a bit of snow on him, accidentally. I helped brush away the snow. Dad started waving his arms again. “Get those wool mitts off my face,” he exclaimed. Forgot dad didn’t like wool against his skin. Finally he was standing again and off we went. I looked back to see how he was doing. Oh, oh, he’s standing on his snowshoe again.

The look on his face as he slowly went forward and then…floomp, face first in the snow. I go back and lift up his head out of the snow. “AAAAAA, my neck, let go,” he called out. So I did…and his head went face first back in the snow. He started waving his arms again so I decided to try and roll him over. It was going good until…”AAAAAA, my ankle,” he yelled. “Looks like it got twisted, you should be more careful,” I said. “I’m not doing anything,” he said. “That’s the problem, try turning your legs while I push,” I explained. He was finally on his back and close to a small birch tree. He was able to grab the tree and with me pushing and pulling he was finally standing again.

“We’re going to get worn out doing this every 50 feet,” I said. “It’s these crazy snowshoes,” he said, “I can walk better without them.” “The snow is too deep,” I reminded him. “I can do it,” he said. So he removed his snowshoes and sunk nearly to his waist in snow. “I can’t walk in this,” he said, “the snow is too deep.” “That’s what I said,” I reminded him, “you’ll have to put the snowshoes back on.” “How will I do that from down here?”, he asked. “Maybe if you sit on the front of my snowshoes,” I told him. He thought that might work, so I moved close. He yelled again, seems I touched his back with one of my snowshoes. Dad said I kicked him hard. He liked to exaggerate sometimes.

He sat down and pushed my snowshoes down. I fell forward and landed on dad and we both ended up in the snow. “My glasses fell off,” he yelled. “You always lose your glasses,” I said. It took awhile but we were both finally up on our snowshoes. “Hey, there’s a nice looking tree,” I said. Dad agreed. “Hand me the saw,” he said. “I thought you had the saw,” I said. Dad just lowered his head, shaking it. Amazingly we made it back to the car quite easily even though I was laughing the whole time. “How do you manage to laugh so much?”, dad asked. “Practice,” I said while still laughing. When we got back home I told mom all about our adventure. She shook her head while laughing loud and long. Dad used to laugh about our adventures too, afterwards.

Well, I do hope you enjoyed this story today. Please come and visit my blog over at Steve’s Country to find more such stories, plus other country related adventures and photos. I hope you are having a most wonderful day and God bless!

37 thoughts on “Another Christmas Tree Adventure!”